Archives For The Month of: March2013

Swire group’s China Navigation Company (CNCo) subsidiary has ordered four 22,000 dwt chief class multipurpose vessels. from Zhejiang Ouhua shipbuilding in Zhoushan. Delivery is scheduled for 2015 with an option for an additional 2+2 vessels in continuation. Swire Shipping say the chief class represents a significant investment and has been specifically designed to meet the […]

European Economy: All Eyes On Cyprus as Bail Out Talks Wrap Up Early

FIERCE negotiations to resurrect a deal for the EU and the IMF to bail out Cyprus appear to have wrapped up early. Early reports state that a preliminary agreement is in place to hit Bank of Cyprus depositors with a massive levy – as much as 40 per cent on deposits of more than 100,000 […] 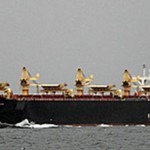 Boost to Freightplus services for Tasmania’s machinery importers and exporters Swire Shipping has today announced a new direct monthly link between Tasmania, Asia, New Zealand and the Pacific.  Swire Shipping and has a reasonably solid track record serving regional markets in Australasia and obviously believes there is sufficient demand for the new service.  With more […]